Why do we feel nostalgia? 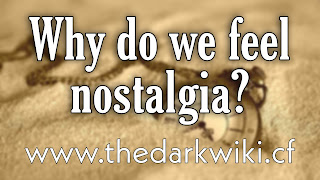 In the late 17th century, a medical student named Johannes Hofer noticed a strange illness affecting Swiss mercenaries serving abroad. Its symptoms, including fatigue, insomnia, irregular heartbeat, indigestion, and fever were so strong, the soldiers often had to be discharged.

As Hofer discovered, the cause was not some physical disturbance, but an intense yearning for their mountain homeland. He dubbed the condition nostalgia, from the Greek "nostos" for homecoming and "algos" for pain or longing.

At first, nostalgia was considered a particularly Swiss affliction. Some doctors proposed that the constant sound of cowbells in the Alps caused trauma to the ear drums and brain. Commanders even forbade their soldiers from singing traditional Swiss songs for fear that they'd lead to desertion or suicide.

But as migration increased worldwide, nostalgia was observed in various groups. It turned out that anyone separated from their native place for a long time was vulnerable to nostalgia. And by the early 20th century, professionals no longer viewed it as a neurological disease, but as a mental condition similar to depression.

Psychologists of the time speculated that it represented difficulties letting go of childhood, or even a longing to return to one's fetal state. But over the next few decades, the understanding of nostalgia changed in two important ways.

Its meaning expanded from indicating homesickness to a general longing for the past. And rather than an awful disease, it began to be seen as a poignant and pleasant experience.

Perhaps the most famous example of this was captured by French author Marcel Proust. He described how tasting a madeleine cake he had not eaten since childhood triggered a cascade of warm and powerful sensory associations.

So what caused such a major reversal in our view of nostalgia? Part of it has to do with science. Psychology shifted away from pure theory and towards more careful and systematic empirical observation. So professionals realized that many of the negative symptoms may have been simply correlated with nostalgia rather than caused by it.

And, in fact, despite being a complex emotional state that can include feelings of loss and sadness, nostalgia doesn't generally put people in a negative mood. Instead, by allowing individuals to remember personally meaningful and rewarding experiences they shared with others, nostalgia can boost psychological well-being.

Studies have shown that inducing nostalgia in people can help increase their feelings of self-esteem and social belonging, encourage psychological growth, and even make them act more charitably. So rather than being a cause of mental distress, nostalgia can be a restorative way of coping with it. For instance, when people experience negative emotional states, they tend to naturally use nostalgia to reduce distress and restore well-being.

Today, it seems that nostalgia is everywhere, partially because advertisers have discovered how powerful it is as a marketing technique. It's tempting to think of this as a sign of us being stuck in the past, but that's not really how nostalgia works.

Instead, nostalgia helps us remember that our lives can have meaning and value, helping us find the confidence and motivation to face the challenges of the future.