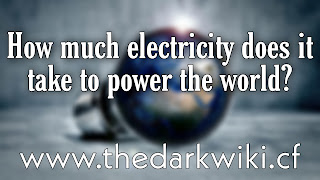 You flip a switch. Coal burns in a furnace, which turns water into steam. That steam spins a turbine, which activates a generator, which pushes electrons through the wire. This current propagates through hundreds of miles of electric cables and arrives at your home.

All around the world, countless people are doing this every second— flipping a switch, plugging in, pressing an “on” button.

So how much electricity does humanity need? The amount we collectively use is changing fast, so to answer this question, we need to know not just how much the world uses today, but how much we’ll use in the future.

Watts tell us how much energy, per second, it takes to power something. One joule per second equals one watt. It takes about .1 watts to power a smart phone, a thousand to power your house, a million for a small town, and a billion for a mid-size city.

As of 2021, it takes 3 trillion watts to power the entire world. But almost a billion people don’t have access to reliable electricity. As countries become more industrialized and more people join the grid, electricity demand is expected to increase about 80% by 2050. That number isn't the complete picture. We'll also have to use electricity in completely new ways.

Right now, we power a lot of things by burning fossil fuels, emitting an unsustainable amount of greenhouse gases that contribute to global warming. We’ll have to eliminate these emissions entirely to ensure a sustainable future for humanity.

The first step to doing so, for many industries, is to switch from fossil fuels to electric power. We'll need to electrify cars, switch buildings heated by natural gas furnaces to electric heat pumps, and electrify the huge amount of heat used in industrial processes.

So all told, global electricity needs could triple by 2050. We’ll also need all that electricity to come from clean energy sources if it’s going to solve the problems caused by fossil fuels.

Today, only one third of the electricity we generate comes from clean sources. Fossil fuels are cheap and convenient, easy to ship, and easy to turn into electricity on demand.

So how can we close the gap? Wind and solar power work great for places with lots of wind and sunshine, but we can’t store and ship sunlight or wind the way we can transport oil. To make full use of energy from these sources at other times or in other places, we’d have to store it in batteries and improve our power grid infrastructure to transport it long distances.

Meanwhile, nuclear power plants use nuclear fission to generate carbon-free electricity. Though still more expensive than plants that burn fossil fuels, they can be built anywhere and don’t depend on intermittent energy sources like the sun or wind. Researchers are currently working to improve nuclear waste disposal and the safety of nuclear plants.

There’s another possibility we’ve been trying to crack since the 1940s: nuclear fusion. It involves smashing light atoms together, so they fuse, and harnessing the energy this releases.

Accidents aren't a concern with nuclear fusion, and it doesn't produce the long-lived radioactive waste fission does. It also doesn’t have the transport concerns associated with wind, solar, and other renewable energy sources.

A major breakthrough here could revolutionize clean energy. The same is true of nuclear fission, solar, and wind. Breakthroughs in any of these technologies, and especially in all of them together, can change the world: not only helping us triple our electricity supply, but enabling us to sustain it.