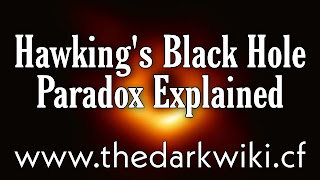 Scientists work on the boundaries of the unknown, where every new piece of knowledge forms a path into a void of uncertainty. And nothing is more uncertain– or potentially enlightening– than a paradox.

Throughout history, paradoxes have threatened to undermine everything we know, and just as often, they’ve reshaped our understanding of the world.

Today, one of the biggest paradoxes in the universe threatens to unravel the fields of general relativity and quantum mechanics: the black hole information paradox.

To understand this paradox, we first need to define what we mean by "information." Typically, the information we talk about is visible to the naked eye. For example,  seeing and apple our eyes recieve information that an apple is red, round, and shiny.

But physicists are more concerned with quantum information. This refers to the quantum properties of all the particles that make up that apple, such as their position, velocity and spin.

Every object in the universe is composed of particles with unique quantum properties. This idea is evoked most significantly in a vital law of physics: the total amount of quantum information in the Universe must be conserved.

Even if you destroy an object beyond recognition, its quantum information is never permanently deleted. And theoretically, knowledge of that information would allow us to recreate the object from its particle components.

Conservation of information isn’t just an arbitrary rule, but a mathematical necessity, upon which much of modern science is built. But around black holes, those foundations get shaken.

When an apple enters a black hole, it seems as though it leaves the universe, and all its quantum information becomes irretrievably lost. However, this doesn’t immediately break the laws of physics. The information is out of sight, but it might still exist within the black hole’s mysterious void.

Alternatively, some theories suggest that information doesn’t even make it inside the black hole at all. Seen from outside, it’s as if the apple’s quantum information is encoded on the surface layer of the black hole, called the event horizon.

As the black hole’s mass increases, the surface of the event horizon increases as well. So it’s possible that as a black hole swallows an object, it also grows large enough to conserve the object’s quantum information.

But whether information is conserved inside the black hole or on its surface, the laws of physics remain intact– until you account for Hawking Radiation.

Discovered by Stephen Hawking in 1974, this phenomenon shows that black holes are gradually evaporating. Over incredibly long periods of time black holes lose mass as they shed particles away from their event horizons.

Critically, it seems as though the evaporating particles are unrelated to the information the black hole encodes– suggesting that a black hole and all the quantum information it contains could be completely erased.

Does that quantum information truly disappear? If not, where does it go? While the evaporation process would take an incredibly long time, the questions it raises for physics are far more urgent.

The destruction of information would force us to rewrite some of our most fundamental scientific paradigms. But fortunately, in science, every paradox is an opportunity for new discoveries.

Researchers are investigating a broad range of possible solutions to the Information Paradox. Some have theorized that information actually is encoded in the escaping radiation, in some way we can’t yet understand. Others have suggested the paradox is just a misunderstanding of how general relativity and quantum field theory interact.

Respectively, these two theories describe the largest and smallest physical phenomena, and they’re notoriously difficult to combine. Some researchers argue that a solution to this and many other paradoxes will come naturally with a “unified theory of everything.”

But perhaps the most mind-bending theory to come from exploring this paradox is the holographic principle. Expanding on the idea that the 2D surface of an event horizon can store quantum information, this principle suggests that the very boundary of the observable universe is also a 2D surface encoded with information about real, 3D objects.

If this is true, it’s possible that reality as we know it is just a holographic projection of that information. If proven, any of these theories would open up new questions to explore, while still preserving our current models of the universe.

But it’s also possible that those models are wrong! Either way, this paradox has already helped us take another step into the unknown.