A Brief History of Plastic 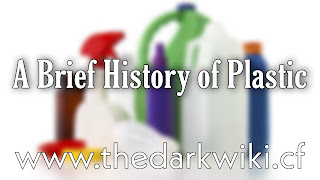 Today, plastics are everywhere. All of this plastic originated from one small object— that isn’t even made of plastic.

For centuries, billiard balls were made of ivory from elephant tusks. But when excessive hunting caused elephant populations to decline in the 19th century, billiard balls makers began to look for alternatives, offering huge rewards.

So in 1863 an American named John Wesley Hyatt took up the challenge. Over the next five years, he invented a new material called celluloid, made from cellulose, a compound found in wood and straw.

Hyatt soon discovered celluloid couldn’t solve the billiard ball problem–– the material wasn’t heavy enough and didn’t bounce quite right. But it could be tinted and patterned to mimic more expensive materials like coral, tortoiseshell, amber, and mother-of-pearl.

He had created what became known as the first plastic. The word ‘plastic’ can describe any material made of polymers, which are just the large molecules consisting of the same repeating subunit. This includes all human-made plastics, as well as many of the materials found in living things.

But in general, when people refer to plastics, they’re referring to synthetic materials. The unifying feature of these is that they start out soft and malleable and can be molded into a particular shape.

Despite taking the prize as the first official plastic, celluloid was highly flammable, which made production risky. So inventors began to hunt for alternatives.

In 1907 a chemist combined phenol— a waste product of coal tar— and formaldehyde, creating a hardy new polymer called bakelite. Bakelite was much less flammable than celluloid and the raw materials used to make it were more readily available.

Bakelite was only the beginning. In the 1920s, researchers first commercially developed polystyrene, a spongy plastic used in insulation.

Soon after came polyvinyl chloride, or vinyl, which was flexible yet hardy. Acrylics created transparent, shatter-proof panels that mimicked glass. And in the 1930s nylon took centre stage— a polymer designed to mimic silk, but with many times its strength.

Starting in 1933, polyethylene became one of the most versatile plastics, still used today to make everything from grocery bags, to shampoo bottles, to bulletproof vests.

New manufacturing technologies accompanied this explosion of materials. The invention of a technique called injection-moulding made it possible to insert melted plastics into molds of any shape, where they would rapidly harden. This created possibilities for products in new varieties and shapes— and a way to inexpensively and rapidly produce plastics at scale.

Scientists hoped this economical new material would make items that once had been unaffordable accessible to more people.

Instead, plastics were pushed into service in World War Two. During the war, plastic production in the United States quadrupled. Soldiers wore new plastic helmet liners and water-resistant vinyl raincoats. Pilots sat in cockpits made of plexiglass, a shatterproof plastic, and relied on parachutes made of resilient nylon.

Afterwards, plastic manufacturing companies that had sprung up during wartime turned their attention to consumer products. Plastics began to replace other materials like wood, glass, and fabric in furniture, clothing, shoes, televisions, and radios. Versatile plastics opened up possibilities for packaging— mainly designed to keep food and other products fresh for longer.

Suddenly, there were plastic garbage bags, stretchy plastic wrap, squeezable plastic bottles, takeaway cartons, and plastic containers for fruit, vegetables, and meat. Within just a few decades, this multifaceted material ushered in what became known as the “plastics century.”

While the plastics century brought convenience and cost-effectiveness, it also created staggering environmental problems. Many plastics are made of nonrenewable resources. And plastic packaging was designed to be single-use, but some plastics take centuries to decompose, creating a huge build up of waste.

This century we’ll have to concentrate our innovations on addressing those problems— by reducing plastic use, developing biodegradable plastics, and finding new ways to recycle existing plastic.