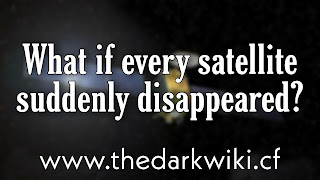 One day, without warning or apparent cause, all of humanity’s artificial satellites suddenly disappear. The first to understand the situation are a handful of government and commercial operators. But well before they have time to process what’s happened, millions sitting on their couches become aware that something is amiss.

TV that’s broadcast from or routed through satellites dominate the market for international programming as well as some local channels, so the disappearance causes immediate disruptions, worldwide.

The next people affected are those traveling by air, sea, or land, as global positioning, navigation and timing services, have entirely ceased. Pilots, captains, and drivers have to determine their locations using analog instruments and maps. Aircraft, ships, and ground vehicles get stopped, grounded, or returned to port.

In the meantime, air traffic controllers have a difficult task on their hands to prevent plane crashes. Within hours, most of the planet’s traffic grinds to a halt.

The effects aren’t limited to entertainment and travel. All sorts of machines, from heating and cooling systems to assembly lines, rely on super-accurate satellite-based timing systems, and many have little-to-no backup options.

Stoplights and other traffic control systems stop synchronizing, so police and good Samaritans step in to direct the remaining cars and prevent as many accidents as possible.

The most catastrophic impact is yet to come. Because in the next few hours, the world economy shuts down. Satellite-based timestamps play a critical part in everything from credit card readers and stock exchanges to the systems that keep track of transactions.

People are unable to withdraw cash or make electronic payments. Logistics and supply chains for crucial goods like food and medicine fragment, leaving people to survive on whatever is locally available.

Most countries declare a state of emergency and call on the military to restore order. That may take quite a while. Most navigation and communication systems are no longer operational, so military chains of command may be in disarray.

Many troops, including those actively deployed, are left to their own devices. Commanders of nuclear submarines and missile control centers wonder if the disruption is the result of a hostile attack. What sorts of decisions do they make with partial information?

Even in the best-case scenario, our civilization gets set back by decades at the very least. That’s because, despite being a relatively new phenomenon, satellites have quickly replaced more traditional long range technologies.

The combination of global positioning and internet has allowed for near-instant signals that can be synchronized worldwide. Many systems we use daily have been built upon this foundation.

Going back to the communication systems of the mid-20th century would not be a simple matter. In many cases, they’d have to be rebuilt from the ground up.

While the sudden disappearance in this thought experiment is unlikely, there are two very real scenarios that could lead to the same results.

The first is a solar flare so strong it fries satellite circuitry– as well as many other devices and power grids around the world.

And the second is an orbital chain reaction of collisions. With about 7,500 metric tons of defunct spacecraft, spent boosters, and discarded equipment orbiting our planet at relative speeds up to 56,000 kilometers per hour, even small objects can be highly destructive. A single collision in space could create thousands of new pieces of debris, leading to a chain reaction.

Space is huge, but many of the thousands of satellites currently in orbit share the same orbital highways for their specific purposes. And since most objects sent to space are not designed with disposal in mind, these highways only become more congested over time.

The good news is, we can protect ourselves by studying our solar system, creating backup options for our satellite networks, and cooperating to avoid an orbital tragedy of the commons.

The space kilometers above our heads is like our forests, the ocean’s biodiversity and clean air: If we don't treat it as a finite resource, we may wake up one day to find we no longer have it at all.