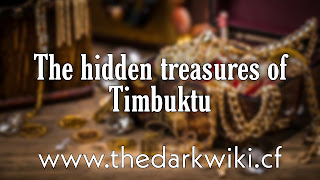 On the edge of the vast Sahara desert, citizens snuck out of the city of Timbuktu and took to the wilderness. They buried chests in the desert sand, hid them in caves, and sealed them in secret rooms. Inside these chests was a treasure more valuable than gold: the city’s ancient books

Founded around 1100 CE in what is now Mali, the city of Timbuktu started out as an unremarkable trading post. But its unique location soon changed that. Timbuktu marked the intersection of two essential trade routes, where caravans bringing salt across the Sahara met with traders bringing gold from the African interior.

By the late 1300s, these trade routes made Timbuktu rich, and the city’s rulers, the kings of the Mali Empire, built monuments and academies that drew scholars from Egypt, Spain, and Morocco. The city’s prime location also made it a target for warlords and conquerors.

As the Mali Empire declined, one of its domains, Songhai, began to gain power. In 1468, the Songhai king conquered Timbuktu, burning buildings and murdering scholars.

But in time, intellectual life in the city flourished again. The reign of the second king of the Songhai Empire, Askia Mohammed Toure, marked the beginning of a golden age in Timbuktu. He reversed his predecessor’s regressive policies and encouraged learning.

The Songhai rulers and most of Timbuktu’s population were Muslim, and the scholars of Timbuktu studied Islam alongside secular topics like mathematics and philosophy.

In the libraries of Timbuktu, tracts of Greek philosophy stood alongside the writings of local historians, scientists, and poets. The city’s most prominent scholar, Ahmed Baba, challenged prevailing opinions on subjects ranging from smoking to slavery.

Gold and salt trade had funded the city’s transformation into a center of learning. Now, the products of that intellectual culture became the most sought-after commodity.

With paper from faraway Venice and vibrant ink from local plants and minerals, the scribes of Timbuktu produced texts in both Arabic and local languages. Written in calligraphy and decorated with intricate geometric designs, the books of Timbuktu were in demand among the wealthiest members of society.

In 1591, the golden age came to an abrupt end when the Moroccan king captured Timbuktu. Moroccan forces imprisoned Ahmed Baba and other prominent scholars and confiscated their libraries.

In the centuries that followed, the city weathered a succession of conquests. In the mid-1800s, Sufi Jihadists occupied Timbuktu and destroyed many non-religious manuscripts.

1894, French colonial forces seized control of the city, stealing even more manuscripts and sending them to Europe. French became the official language taught in schools, and new generations in Timbuktu couldn’t read the Arabic manuscripts that remained.

Through it all, the literary tradition of Timbuktu didn’t die— it went underground. Some families built secret libraries in their homes, or buried the books in their gardens. Others stashed them in abandoned caves or holes in the desert. The priceless manuscripts of Timbuktu dispersed to villages throughout the surrounding area, where regular citizens guarded them for hundreds of years.

As desertification and war impoverished the region, families held on to the ancient books even as they faced desperate poverty and near-starvation. Even today, the struggle to protect the books continues.

From the 1980s to the early 2000s, Timbuktu scholar Abdel Kader Haidara painstakingly retrieved hidden manuscripts from all over northern Mali and brought them back to Timbuktu.

But in 2012, civil war in Mali once again threatened the manuscripts, most of which were evacuated to nearby Bamako. Their future remains uncertain, as they face both human and environmental threats.

These books represent our best— and often only— sources on the pre-colonial history of the region. Many of them have never been read by modern scholars, and still more remain lost or hidden in the desert. At stake in the efforts to protect them is the history they contain— and the efforts of countless generations to protect that history from being lost.