How does Laser Eye Surgery work? 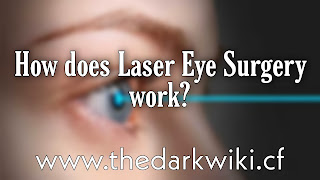 In 1948, Spanish ophthalmologist Jose Ignacio Barraquer Moner was fed up with glasses. He wanted a solution for blurry vision that fixed the eye itself, without relying on external aids. But the surgery he eventually devised was not for the faint of heart.

Barraquer began by slicing off the front of a patient’s cornea and dunking it in liquid nitrogen. Using a miniature lathe, he ground the frozen cornea into the precise shape necessary to focus the patient’s vision. Then he thawed the disc, and sewed it back on.

Barraquer called this procedure keratomileusis, from the Greek words for “carving” and “cornea.” And though it might sound grisly, his technique produced reliable results.

So how did Barraquer’s surgery work? Keratomileusis corrects what are called refractive errors (imperfections in the way the eye focuses incoming light).

Ideally, the cornea and lens work together to focus light on the surface of the retina, but several kinds of refractive errors can impair this delicate system.

In people with myopia, or short-sightedness, a steep cornea focuses light just short of the retina. Those with hyperopia, or far-sightedness, have the opposite problem: light is focused too far beyond the retina. And in people with astigmatism, the cornea has two different curvatures which focus light at two distances and produce blurry vision. 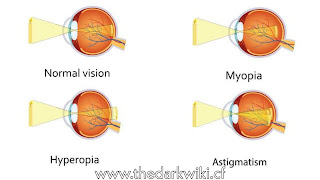 Even those with perfect vision will eventually suffer from presbyopia, or “aging eyes.” As the proteins in the lens age, they slowly increase its size. By an adult’s mid-40’s, the lens is too large to easily change shape and shift focus.

Glasses and contact lenses bend light to compensate for these refractive errors. But, as Barraquer’s procedure shows, we can also alter the shape of the cornea itself; moving the focal point backwards, forwards, or pulling a divided image together.

And thankfully, modern eye surgeons can sculpt the cornea with far less invasive tools. In corrective laser eye surgery, surgeons rely on excimer lasers. These tools are accurate enough to etch words into a human hair.

To safely accomplish these ultra-fine incisions, they use a technique called photoablation. This allows the laser to essentially evaporate organic tissue without overheating surrounding eye tissue.

So how does laser eye surgery actually work? The first step is to separate a thin layer from the front of the cornea. This can be done with either a flat, wide blade, or a femto-second laser that produces millions of tiny plasma bubbles to create a plane beneath the corneal surface.

Surgeons then lift the flap to expose the inside of the cornea. Guided by the refractive error and the shape of the cornea, the excimer laser robotically sculpts the exposed corneal bed into the correct shape. This process usually takes less than 30 seconds for each eye.

Finally, the flap is closed, and its edges reseal themselves in just a few hours. Because the lasering is done on the eyeball itself, it’s described as “in situ,” or “on site.” Its complete name is “laser in-situ keratomileusis” – but you probably know it as LASIK. Essentially, this technique carves a patient’s contact lens prescription onto their cornea.

Like any surgical procedure, LASIK comes with certain risks. Some patients experience slightly blurred vision that can’t be corrected by glasses. But the technique is currently about as likely to damage your eyes as wearing daily disposable contact lenses for one year.

In a technique called Laser Blended Vision, surgeons adjust one eye to be slightly better at distance vision and the other to be better at close range vision. The difference between the two eyes is small enough that most patients can merge their vision, allowing both eyes to work together at all distances.