Why Do We Dream?

Today we are going to talk about Why We Dream. 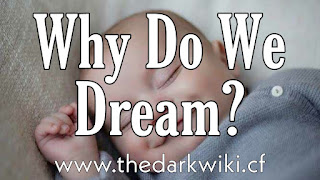 What's going on inside our brains? The scientific study of dreaming is called oneriology. And for most of history, it didn't really exist, because you can't hold a dream. It's difficult to measure a dream, you can't taste it. You can't see other people's dreams, and if you ask them to tell you what they dreamt, the results are almost always unreliable. In fact, it's estimated that we forget 95 per cent of the dreams we have, especially within the first ten minutes of having them.

But then, in 1952, something amazing happened. Researchers at the University of Chicago found a unique type of electrical activity that occurs during a certain stage of a person sleeping. When researchers awoke people during this stage, they almost always reported that they had been dreaming. Also, at the same time, during this stage, people's eyeballs are going crazy, rapidly darting all over the place underneath their eyelids. You can actually see this happening if you watch people sleep like I usually do.

During REM sleep, some pretty bizarre stuff happens. If you look at the electrical activity of a brain that is in REM sleep, it almost exactly mimics the way the brain acts when it's awake. The biggest difference being that the production of chemicals inside the brain like norepinephrine, serotonin, and histamine is almost completely blocked, and that causes the muscles to stop moving, which is why you can dream about flying or running around or fighting ninjas, but your body doesn't move. People who have a disorder achieving complete REM atopia move around in their sleep and act out their dreams. They can even get out of bed and sleepwalk.

Before we move forward, I should say two things. One is that it's possible to wake up and not be able to move your body because you're still in REM atopia. You're completely conscious and you know that you're awake, but your body is not ready to move. On the flip side, you can also be inside a dream and know that you're dreaming. This phenomenon is known as lucid dreaming, and it's particularly attractive because while in an illusive dream, I can make conscious decisions about what I do. I can go fly to wherever I want, or I can have a tea party with Iron Man. I'm in control, but achieving illusive dream is quite illusive.

Researchers were able to deprive mice of REM sleep by using a small pot like structure inverted inside a tub of waterway up to the tippy top, meaning that the mouse was only able to sit right on top of this little tiny surface. 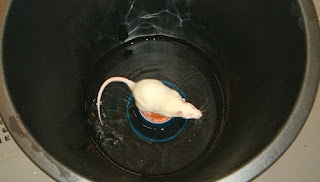 When that happens, the mouse can still fall into non-REM sleep, but as soon as they reach REM sleep and their muscles relax, they fall off the platform into the water waking up. What Researchers found was that when mice are not allowed to achieve REM sleep, they have an incredible amount of trouble remembering things. This happens in humans too. If you have people remember word pairs and then you don't allow them to sleep, the next day, their memory for that stuff is incredibly terrible.

But memory and REM does not stop there. If a person learns a difficult new task during the day, say a new instrument or a new type of difficult puzzle, you can measure the electrical activity in their brain while they do that, and then while they sleep that night, whether they know it or not, their brain replays those electronic impulses.

Many popular theories about why we dream are variations on the idea that while we sleep, the unconscious part of our brain is busy organizing memories and strengthening connections from the day before that we need in the future while getting rid of the junk that would otherwise clog the brain. Now, so the theory goes, these electrical impulses are detected by our conscious brain, and our cortex freaks out. It doesn't know what it means, and so it tries its best to create a cohesive story, creating a dream.

This would explain why dreams are often so fantastic and seemingly random. They're not supposed to make sense, they're not an actual message from our brain. It's just the results of our cortexes trying to synthesize the noise coming from all the work being done back in the unconsciousness. Under this way of thinking, dreams are an epiphenomenon. They're not a primary process that has a purpose. Instead, they're the accidental result of a more important process going on behind the conscious brain.

But some researchers don't believe that. They believe the dreams serve a primary purpose, and that purpose is to prepare us for threats. They think this because the most prevalent emotions felt during dreams are negative. Abandonment, anger, and the most common of all, anxiety. The theory goes like this:

Back when we were early humans especially, we had no idea what kind of threats we might encounter during the day. And so, to prepare us, our brain would simulate anxieties while we slept to make us better prepared for that feeling in the real world. So people who had terrifying dreams were better at dealing with anxiety in the real world and had stronger genes.

All right, so the theories we discussed today are quite popular, but they don't really enjoy a consensus. Not everyone agrees on them, and they barely scratch the surface of scientific thought about dreams. But that's kind of the cool thing about dreams.

Think of it like this. Here is the eagle nebula—a giant structure in outer space 6,500 light-years away. Despite its distance, we pretty much know what it's made out of. We know that it's 100 trillion kilometres tall, we know what caused it, and we know where it's going to be in 750 million years. But last night, I had dreams, and no one really knows why or for what reason. And that's pretty cool.