The Language of Lying | How to Spot a Lair. 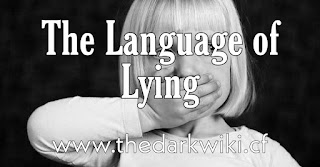 "It's nothing. I'm fine."
"These allegations are completely unfounded."
"The Company was not aware of any wrongdoing."

We hear anywhere from 10 to 200 lies a day, and we spent much of our history coming up with ways to detect them, from medieval torture devices to polygraphs, blood-pressure and breathing monitors, voice-stress analyzers, eye trackers, infrared brain scanners, and even the 400-pound electroencephalogram.

But although such tools have worked under certain circumstances, most can be fooled with enough preparation, and none are considered reliable enough to even be admissible in court.

But, what if the problem is not with the techniques, but the underlying assumption that lying spurs physiological changes? What if we took a more direct approach, using communication science to analyze the lies themselves?

On a psychological level, we lie partly to paint a better picture of ourselves, connecting our fantasies to the person we wish we were rather than the person we are.

But while our brain is busy dreaming, it's letting plenty of signals slip by. Our conscious mind only controls about 5% of our cognitive function, including communication, while the other 95% occurs beyond our awareness, and according to the literature on reality monitoring, stories based on imagined experiences are qualitatively different from those based on real experiences. This suggests that creating a false story about a personal topic takes work and results in a different pattern of language use.

A technology known as linguistic text analysis has helped to identify four such common patterns in the subconscious language of deception.

First, liars reference themselves less, when making deceptive statements. They write or talk more about others, often using the third person to distance and disassociate themselves from their lie, which sounds more false:

"Absolutely no party took place at this house,"

Second, liars tend to be more negative, because on a subconscious level, they feel guilty about lying. For example, a liar might say something like,

"Sorry, my stupid phone battery died. I hate that thing."

Third, liars typically explain events in simple terms since our brains struggle to build a complex lie. Judgment and evaluation are complex things for our brains to compute. As a U.S. President once famously insisted:

"I did not have sexual relations with that woman."

And finally, even though liars keep descriptions simple, they tend to use longer and more convoluted sentence structure, inserting unnecessary words and irrelevant but factual sounding details in order to pad the lie. Another President confronted with a scandal proclaimed:

"I can say, categorically, that this investigation indicates that no one on the White House staff, no one in this administration presently employed was involved in this very bizarre incident."

Let's apply linguistic analysis to some famous examples. Take seven-time Tour de France winner Lance Armstrong. When comparing a 2005 interview, in which he had denied taking performance-enhancing drugs to a 2013 interview, in which he admitted it, his use of personal pronouns increased by nearly 3/4. Note the contrast between the following two quotes.

"Okay, you know, a guy in a French, in a Parisian laboratory opens up your sample, you know, Jean-Francis so-and-so, and he tests it. And then you get a phone call from a newspaper that says: 'We found you to be positive six times for EPO."

In his denial, Armstrong described a hypothetical situation focused on someone else, removing himself from the situation entirely. In his admission, he owns his statements, delving into his personal emotions and motivations. But the use of personal pronouns is just one indicator of deception. Let's look at another example from former Senator and U.S. Presidential candidate John Edwards:

Not only is that a pretty long-winded way to say, The baby isn't mine, but Edwards never calls the other parties by name, instead saying "that baby," "the woman," and "the apparent father."

Now let's see what he had to say when later admitting paternity:

"I am Quinn's father. I will do everything in my power to provide her with the love and support she deserves."

The statement is short and direct, calling the child by name and addressing his role in her life.

So how can you apply these lie-spotting techniques to your life? First, remember that many of the lies we encounter on a daily basis are far less serious that these examples, and may even be harmless.

But it's still worthwhile to be aware of telltale clues, like minimal self-references, negative language, simple explanations and convoluted phrasing.

It just might help you avoid an overvalued stock, an ineffective product, or even a terrible relationship.