How much does Internet weight? 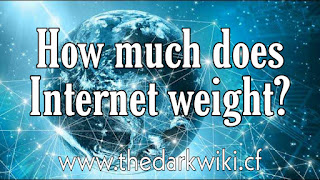 What is weight of average strawberry? 50 grams. Which according to Russell Seitz also happens to be the weight of the entire Internet. What does that mean? I mean, the Internet is a gigantic place and how do you measure information?

Well, let's start a little bit smaller with a Kindle. There's a novel named Gadsby, which is a great novel that makes complete sense, except it was written without ever using the letter "e," which is awesome. But if we download Gadsby on our Kindle, does our Kindle gain weight?

Well, theoretically, yes it did. Information is stored on flash drives like this and on my Kindle in binary. And that binary physically exists because electrons charge floating gate transistors. And the thing about electrons is that they have mass. In fact, a professor at Berkeley estimated that when a Kindle is completely full of books, its weight increases by about 10 to the negative 18th grams. That number is mind blowingly miniscule. In fact, he says that when you fully charge a Kindle's battery, it gains 100 million times more mass than it does when you fill it with books. But even then the number is impossible to measure. The most specific scales we've ever created only measure to about 10 to the negative 9th grams.

So let's get bigger. Russell Seitz came up with his measurement because the Internet is composed of networks of servers and they're about 75 to 100 million servers operating to make the Internet work. Combined, that many servers equal about 40 billion Watts of electricity and we know that an Amp is about 10 to the 18th electrons per second. And since we know the weight of an electron we can calculate that the entire Internet is really just about 50 grams of electrons in motion. Now that number only includes servers. And Seitz says that if you wanna include the chips in personal computers as well, the number's about 3 times larger.

But there's a weight of the Internet that impresses me a little bit more. It's a calculation not of the energy it takes to serve the Internet, but the energy contained in the actual information. The videos, the pictures, the e-mails. How much do they all collectively weigh when stored?

Well, here's the thing. It takes about 8 billion electrons to store one e-mail. 8 billion sounds like a lot, but electrons are tiny and so one e-mail only weighs about two ten-thousandths of a quadrillionth of an ounce. But the Internet contains lots of e-mails and it contains lots of video and images and celebrity rumours, so how much does it weigh altogether?

Well, the first question we have to ask is how big is the Internet and that's difficult to calculate, but Eric Schmidt, then-CEO of Google, once estimated that the entire Internet contains about 5 million Terabytes of information, of which, he said, Google has only indexed 0.004%. Okay, so not counting the energy it takes to deliver the Internet, the information itself on the Internet is about 5 million Terabytes. Now, we know how many electrons it takes to form a single byte and we know the mass of an electron and so with a little bit of math you can figure out that the entire Internet, everything on it, collectively only weighs 0.2 millionths of an ounce.